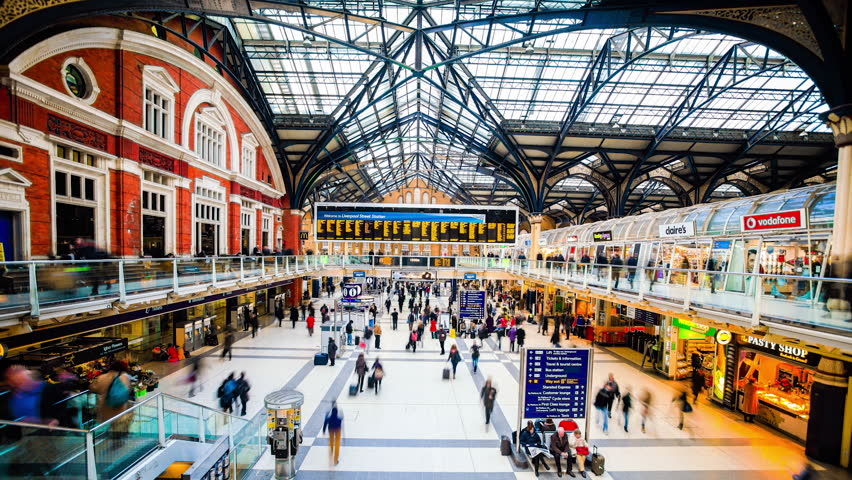 It’s not every day you get to work with a high market fashion designer, but it was for me, at least for four days anyway.

I was so excited as this was my first time experiencing working in the Fashion industry first hand, and my first time traveling to London on my own.

I’m not going to lie but it was a very odd feeling getting the train to London with a suitcase on my own off to go and work in the ‘big smoke’. Not to say I didn’t love going to Starbucks and walking around not having to look over my shoulder to check everyone is together and we haven’t lost anyone. Nope, just me, myself and I. After having a Christmas hot chocolate and salmon bagel, I got the tube from St Pancras to Sarah’s house. I was kindly greeted and shown into the studio and shown the stockroom. Everywhere was covered in metallic, animal pattern leather and fur, with boxes and jars full of pins, sequins, and clips galore. Bags of scraps filled a corner, any students dream (to find free scraps of very expensive material).

My first day was spent making many keyrings (https://www.sarahbaily.com/accessories/sisters-of-the-moon) , with lots of different slogans laser cut on them inspired by nights out with friends: ‘I’m not going home’, ‘Girlgang’ and ‘Sisters of the moon’. Other keyrings I made were made using leftover tassels from the jackets, I then packed them in cute black envelopes, labelled them and sent them off to customers at the post office. After finishing, I got the tube back to St Pancras where I looked around all the shops before heading to meet my cousin whom I was staying with.

On my second day, I woke up quickly realising I was in fact in London and not home at Canterbury. Feeling very grown up getting the tube on my own with a hot chocolate in one hand and my oyster card in the other, I felt unbeatable. But to others around my I probably looked rather out of place. They may have been dreading yet another day at work, but for me, I was buzzing to be in London and working. This day I had been sent the address of a leather workshop which I was asked to meet Sarah at. Now for me, my first time in London on my own and not the best at knowing every street in the whole city, it was a mission to find this place, as I had only just worked out the day before where her house was. Anyway, using my 4G and the best London navigating apps I could find, I found the place perfectly. Arriving early, I decided to explore. Stepping out of the over ground station I saw a market buzzing with people buying fruit and veg, walking along the street I stopped outside a very aesthetically pleasing shop window, full of plants and cute light bulbs, Pinterest would bloody love this place. Anyway, I walked in because I was nosey and found a very eco-friendly shop, selling vegan, vegetarian, gluten-free produce, lots of veg and fruit, cacti, and wood fired pizza with a huge pizza oven behind the counter. Leaves and vines fell from the ceiling – I was in love with the look of this place! However, I walked out because I was intrigued at what else this place had to offer. I found yet another café hidden behind a wall with a little door in. As I walked through this café there was a little shed in a huge garden full of blankets and seats, so I decided to have yet another hot chocolate to support this cute little place. I was hungry though and they didn’t do food. Opposite the road was a very nice place with an outstanding menu. I got an eggs royale which was heaped with sauce and salmon, that I couldn’t even eat it all! Anyway, I walked to the leather workshop, where I was immediately given control of a huge cutting machine without taking any course and with little instruction. Although it turned out to be a lot simpler than anticipated and I cut out pattern pieces from the leather the rest of the day, which was very satisfying.

In the evening, I decided to venture to Oxford street as my broke ass never ventures there, but this day I felt I could do anything so in I went. (I left having spent about £60). The Christmas lights were up and they were spectacular. The population of London seemed to be out to see the lights too. After walking around all the streets, I decided to at least step into a few shops. Typically, Zara had a visit and left with a bag, of course. But with more than three H&Ms oxford street was telling me to go in one, and I left with yet another bag… 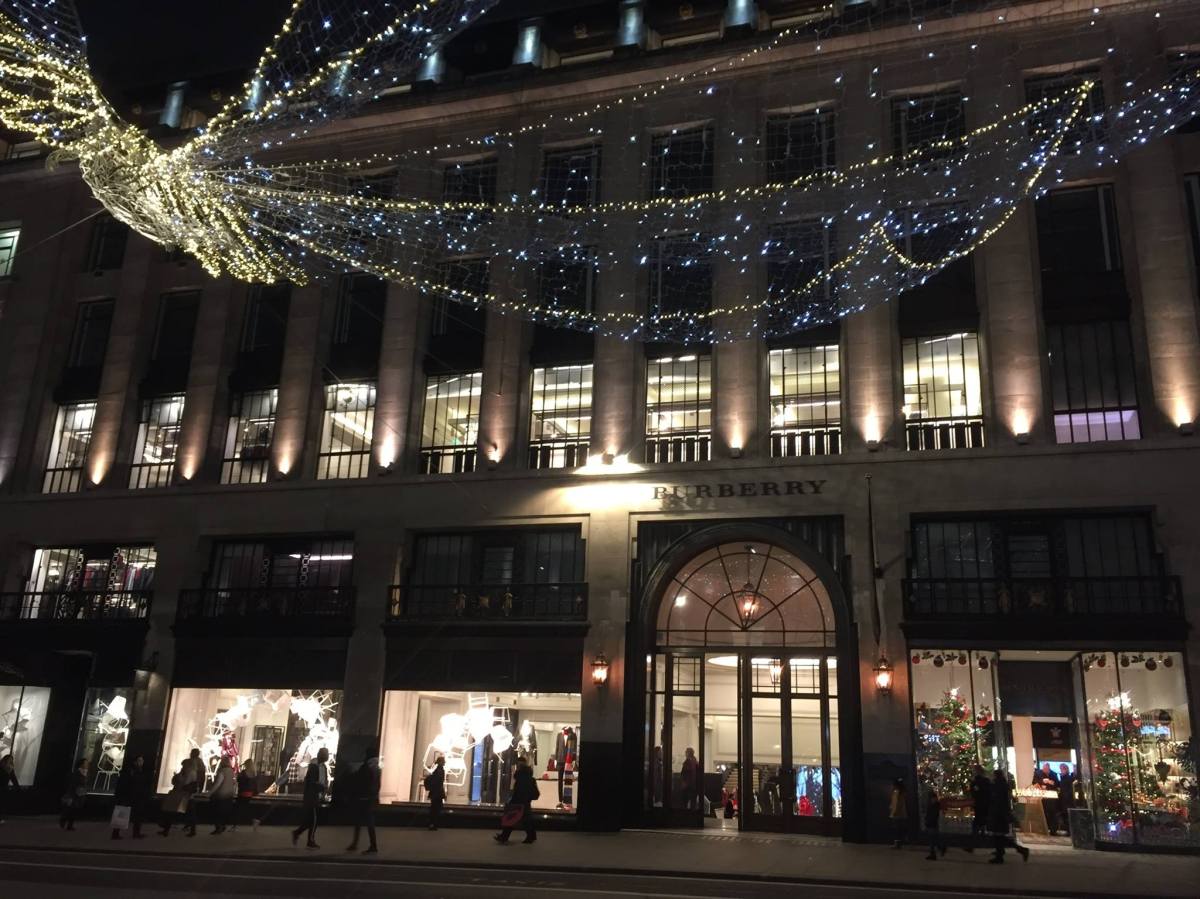 But I went to see more than just one street, I wanted to see Carnaby streets lights. This year they were like carnival themed with huge tropical birds and leaves, like you were looking at Rio. After seeing Carnaby street and having a walk through, I called it a night and went back ‘home’ to eat. 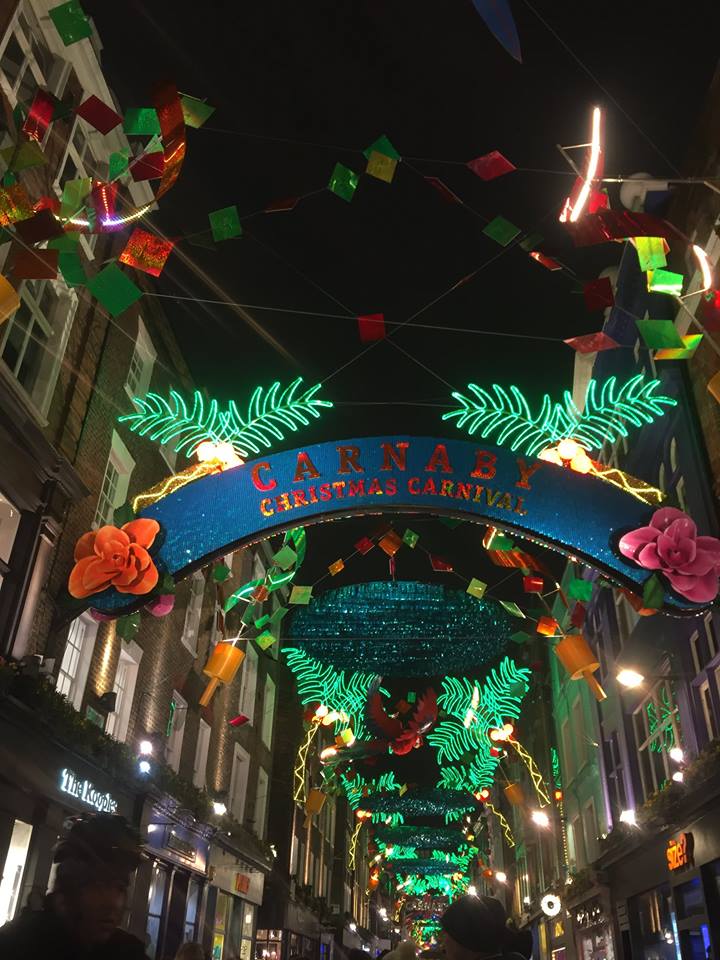 Day three and its beginning to feel normal commuting around London. Back to Sarah’s home and I sort out the stock room, looking through all the beautiful pieces, make some orders up and stuff some star shaped pillows. I did have a mini photoshoot in one of the jackets and felt like I should be at a festival.  After the day ended, I went back to where it all started ‘180 the strand’ where London Fashion Week was held, however this time it was home to an art exhibition. Walking around looking at all the bizarre and funky creations the artists had made it, I could just think of what a good double page it would make in my a-level art sketchbook. Unfortunately, I didn’t have long as it was closing early as a group was going around privately. I decided to cross the bridge to explore the Southbank Christmas market along the river. I was reminded of Canterbury by all the Christmas huts full of food and cute trinkets, stretched along the side of the path. As it was my last proper night in London I decided to treat myself to some fish and chips with fried crispy haloumi, and it was divine! The best fried haloumi I have had, all covered in crispy batter, I ate it all. Not only were there huts along the river but through an archway there was a Rekordereig cider hut which smelted of mulled wine and hot alcohol, however you had to have it in a mug which had to be returned and I was not about that life, so yet again I got a hot chocolate and with one last walk around through all the Christmas lights and trees in the market, I decided to head back as there’s only so much you can do as one person and everyone in London did not seem like socialising with little old me. I walked to the tube station, and with one emotional look back at London lit up at night, I went ‘home’.

Whey, the tale has not ended yet for I still have one more day left in London! After awakening to a packed bag, I felt a little sad that my adventure was at an end but also blooming excited to be going back to Canterbury civilisation! On my last commute to Sarah’s I looked emotionally out of the window and watched as London passed my eyes in a flash…until the bus stopped. But in all seriousness, I was looking at a place where even in the random places there would be at least one cute little coffee shop that kept going of the few people who popped by. But also, where huge empires are built from nothing. If there is anywhere to be in business, its London. 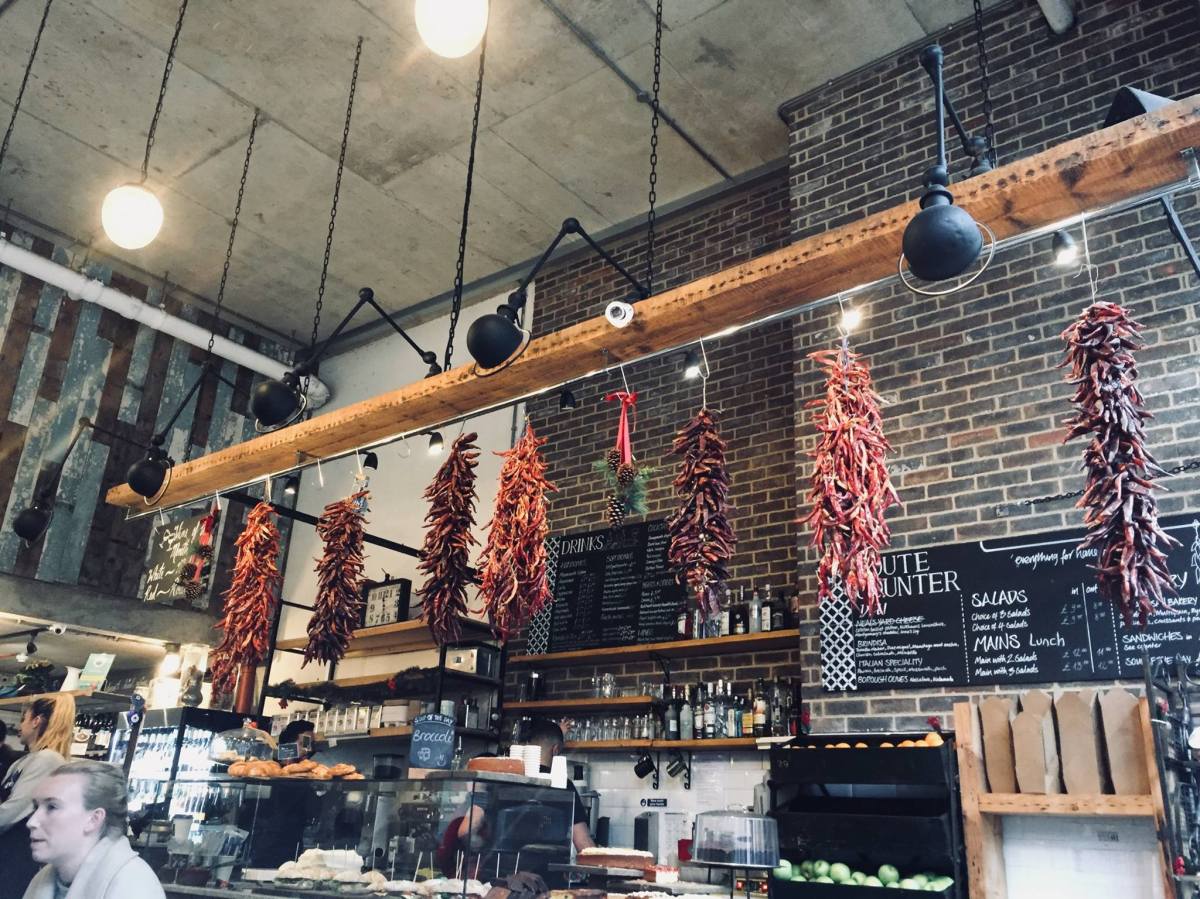 After finishing another day working with Sarah, I was given a free card wallet which I still use now and probably always will. It’s the golden leopard one 😉 I walked out of the doors to her house and felt overwhelmed by a strange feeling of almost aspiration. I felt so humbled by the week but also rather taken back. However out of all the emotions I could have felt, happiness and excitement for the future defeated all. I got on the tube to St Pancras full of energy, I don’t know if it was just London feeding me the buzz or it was all the inspiration I had collected over the past few days, but I felt so matured like a rich cheese ready to be opened. At St Pancras, I did a bit of typical British family souvenir shopping, so I could prove to them I was a grown-up who had travelled on my own. I ordered my small hot chocolate, as well as the old man in front of me, but to my amazement the lady behind the counter gave me the large one of the two whilst winking at me and the older man the small, after a large was accidently made instead. Obviously, I looked like I needed it after such a week, a small sweaty girl with a suitcase. 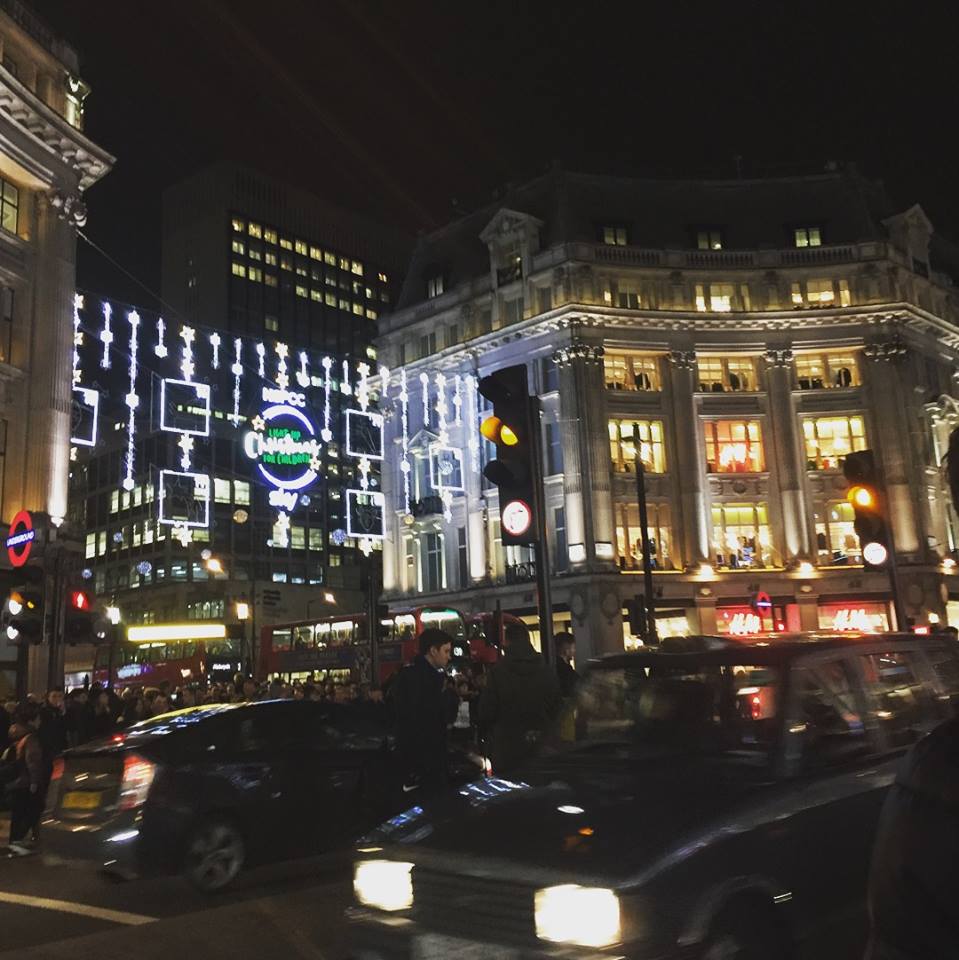 As I stepped off the train back into Canterbury, I felt as if my energy and aspiration had fallen from me a little and all I could think of was the A-levels I had left behind Perhaps it was the atmosphere of London which had given me such passion and excitement for the future.  Maybe for the best. I will have to return to my wild imagination and ideas for the future once I have secured my grades eh ahaha.

Till next time London…